The U.S. DER landscape by 2025 will consist of nearly 400 GW of capacity ranging from solar and storage to EVs ...

A new Wood Mackenzie forecast describes the emerging U.S. markets for distributed solar, batteries, flexible loads and electric vehicles as grid assets. The U.S. market for distributed energy resources will look very different in five years than it does today. Fossil-fueled combined-heat-and-power systems will continue to take a back seat to distributed solar and energy storage for behind-the-meter generation — although resilience against wildfires, hurricanes and other extreme weather events will drive adoption of both.  Residential smart thermostats and electric water heaters will supplant direct load controls in homes as a primary source of demand response, creating large new reservoirs of potential grid flexibility for utilities, grid operators and aggregators.  And electric vehicles will give utilities and regulators the opportunity to promote pricing regimes to encourage charging when electricity is abundant — or suffer potentially grid-destabilizing consequences.

These are some of the key findings in a new report from Wood Mackenzie Power & Renewables that pulls together disparate technologies into a broad-ranging forecast. By 2025, the combined capacity of these distributed energy resources (DERs) will reach 397 gigawatts, driven by $80.6 billion in cumulative investment between 2020 and 2025. The COVID-19 pandemic and resulting economic downturn will reduce DER investments in 2020 and 2021, as solar and storage projects face permitting and installation delays, and as rising unemployment and falling economic activity threaten household and business budgets. But by 2023, the market will exceed its 2019 peak, and by 2025 will grow well beyond it. Here are some key takeaways from the Wood Mackenzie analyst webinar detailing the rise of these grid edge resources.

Solar will retain its leading role in distributed generation

Over the past decade, distributed solar has taken the lead over fossil-fueled generators for behind-the-meter generation, WoodMac analyst Isaac Maze-Rothstein noted. That’s largely because the advantages of combined-heat-and-power systems fired with cheap natural gas, which make up 86 percent of fossil-fueled on-site generation installed since 2000, have been matched by the falling costs and favorable policies for solar PV at the residential and commercial scale. 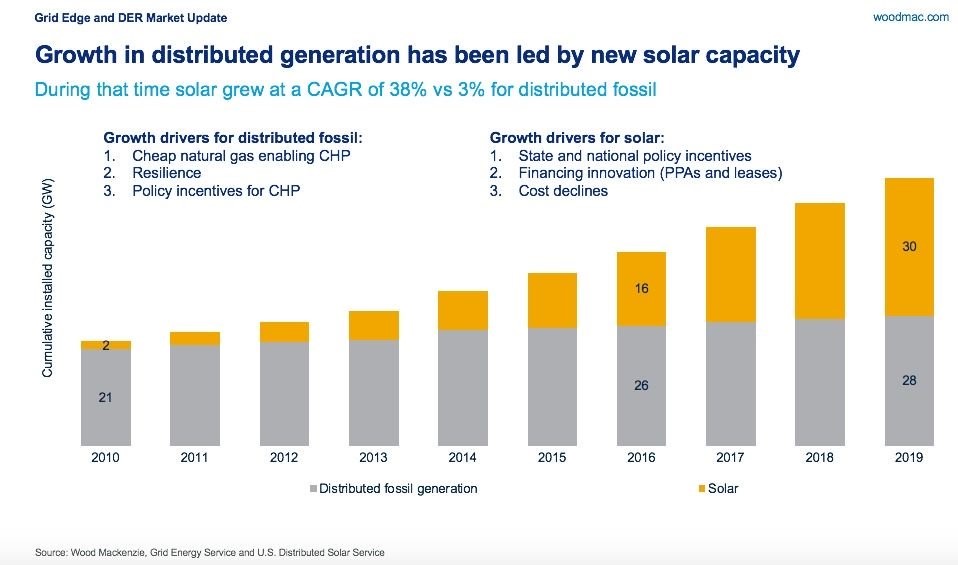 Solar won't be as cheap in the coming years, as the declining federal Investment Tax Credit will slightly outmatch continued cost declines, he said. Still, solar will grow at a faster rate than fossil-fueled generation, making up roughly two-thirds of the 95 gigawatts of distributed generation expected for the U.S. market by 2025, according to Maze-Rothstein. Resiliency will be a major driver for distributed generation and energy storage Generators can provide some services that solar PV alone can't, such as backup for days-long grid disruptions. The number of extreme weather events that caused more than $1 billion in damages increased 133 percent over the past decade, and climate change will likely lead to more of them in the years to come. But the value of combined-heat-and-power systems is limited to relatively few areas where natural-gas prices are much lower than grid electricity.

Most future on-site fossil-fuel generators are likely to "be used almost as a peaking asset, where they are helping with resiliency and generating revenue through interacting with the grid," Maze-Rothstein said. Energy storage — primarily lithium-ion batteries — will also benefit from the need for resiliency, said Brett Simon, WoodMac senior energy storage analyst. Fire-prevention blackouts in California have driven up battery "attach rates" for solar installations, and Gulf Coast and Eastern Seaboard hurricanes are creating similar market dynamics. Resiliency isn't the only driver for batteries, Simon noted. Commercial demand-charge management, shifting net-metering policies that make storing solar power more lucrative, and the potential for grid services will also play a role in driving behind-the-meter storage to become a 6.2 gigawatt-hour annual market by 2025. 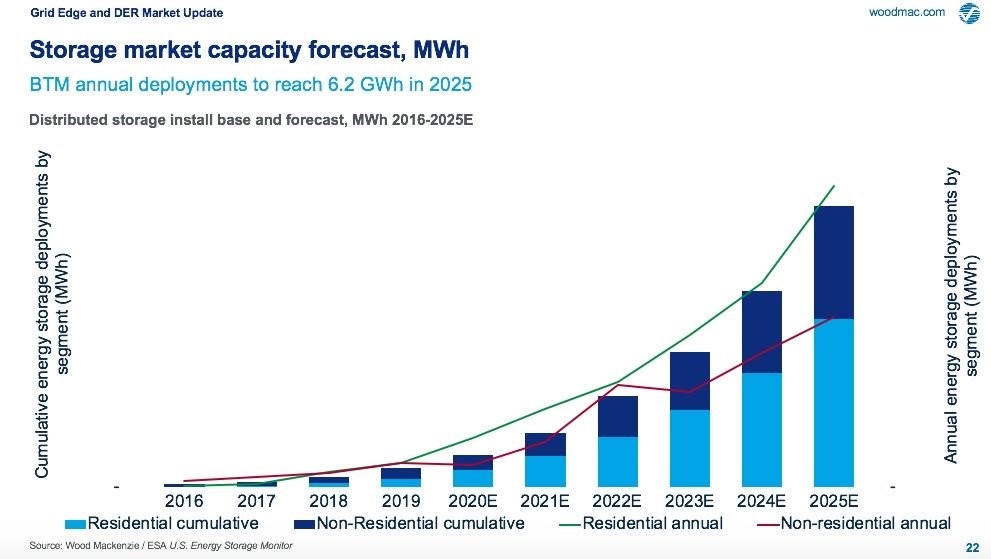 In terms of tapping electrical loads to serve grid needs, the next five years will see the residential sector grow in importance compared to the commercial and industrial sectors, as the total amount of U.S. load management potential grows to 215 gigawatts by 2025, WoodMac senior analyst Fei Wang said. Traditional load-control programs can experience nonresponse issues with direct load control switches, and there is a continued rise in adopting smart thermostats that can precool homes and fine-tune temperature settings, and smart water heaters can preheat and then shut down during winter heating peaks.

The available flexibility of homes with Nest, ecobee and Honeywell smart thermostats already exceeds the roughly 8.5 megawatts of direct load control, and states are beginning to mandate grid-responsive water heaters for new installations. In the meantime, the commercial and industrial load management market is expected to stagnate due to the long-term impacts of the COVID-19 downturn, as retail stores are closed and office buildings remain underutilized, she said. But at roughly 165 gigawatts by 2025, that's "still a huge potential to be tapped into." To leverage that, utilities and regulators must adopt "a different paradigm in program design" to capture this latent flexibility, which far exceeds industry expectations of the need for demand response over the next half-decade. 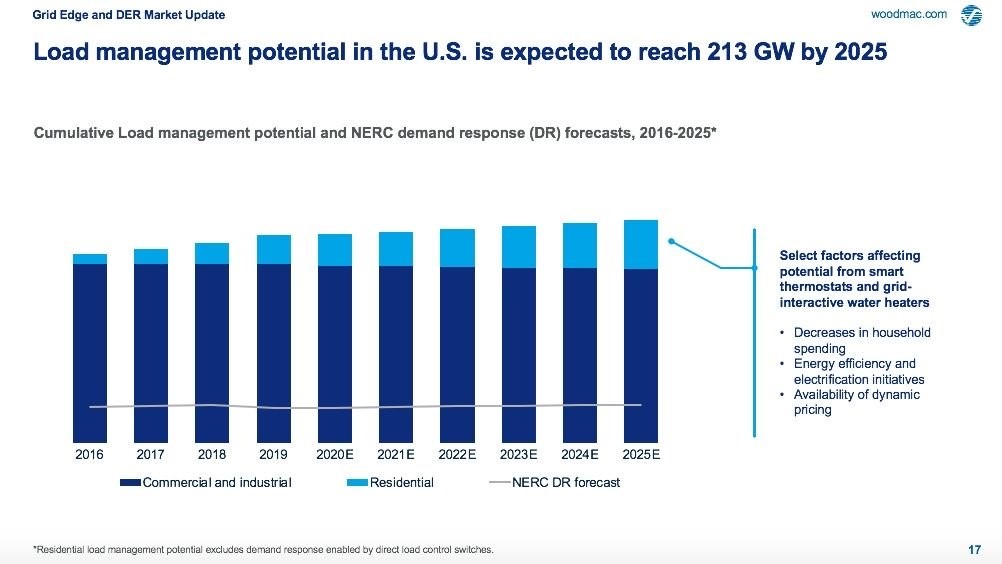 Electric vehicles to give rise to a "mobile storage" market

The COVID-19 pandemic will hurt EV sales in 2020 and 2021, according to Ben Kellison, WoodMac grid research director. But new medium- and light-duty truck and SUV EV models will expand consumer options in 2021 and 2022 and falling battery prices should allow EVs to reach cost parity with internal combustion engine vehicles by 2025.
But for utilities and grid operators, EVs are a "mobile storage story," Kellison said. On that front, the high rate of single-family homeownership in the U.S. will allow most EVs to be charged overnight, when electricity is plentiful, rather than during peak afternoons and early evenings, which should help mitigate their grid impacts. Public charging is harder to time-shift, but opportunities are opening up for fleet vehicles like electric school buses, he said. 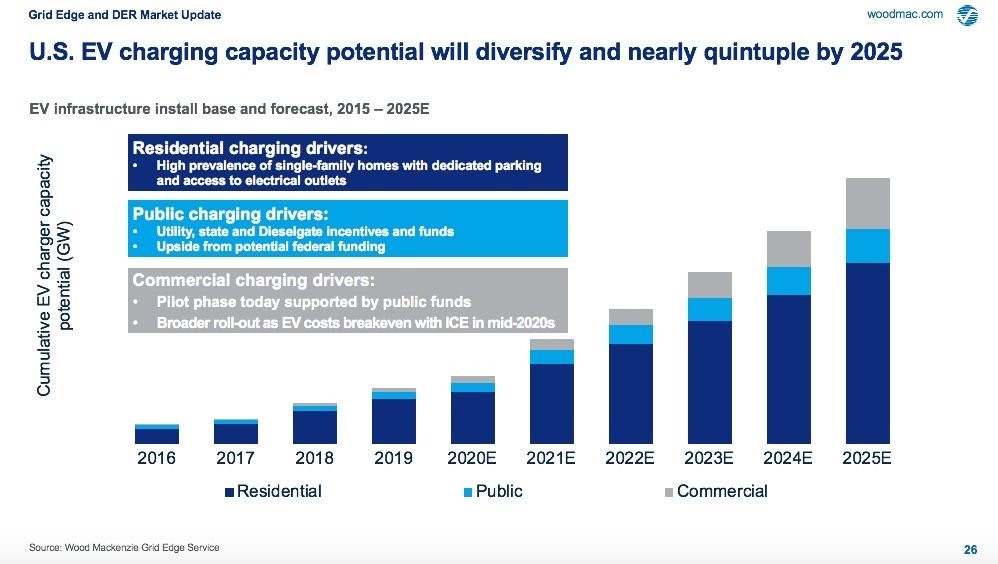 This mix of distributed generation, storage capacity and flexible load will require "multi-asset aggregations" to capture its full range of grid values, said Elta Kolo, WoodMac grid edge research content lead. But aggregations in the form of microgrids, virtual power plants or integrated "connected homes" also need new market constructs to earn money for what they can do, she added. The Federal Energy Regulatory Commission's Order 841 has pushed interstate grid operators to adapt wholesale markets to permit the inclusion of energy storage in units as small as 100 kilowatts, enabling aggregations of behind-the-meter assets in some markets.

A separate proceeding on incorporating DERs at large has yet to be taken up by FERC, but could be launched this year, industry watchers believe. Meanwhile, states are taking strides in bringing DER aggregations into market constructs, as with California's Demand Response Auction Mechanism pilot program and New York's Value of Distributed Energy Resources tariff. These and other states are also asking utilities to create pathways for DERs to be enlisted to defer or avoid grid investments as non-wires alternatives, even if progress on this front has been halting. And the prospect for batteries, EVs and flexible loads to smooth and integrate intermittent renewables will become an opportunity "as we get into more meaningful levels of renewables on our grid." 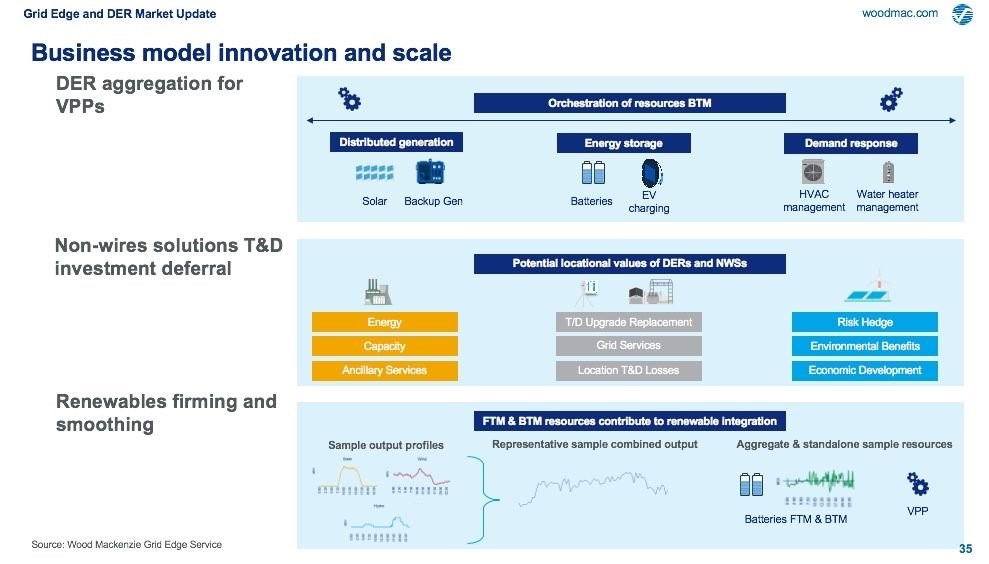