As CCAs Take Over Utility Customers, Local Renewable Generation Emerges as the Next Big Growth Driver

November 04, 2019 - The demand for customer choice has the potential to quicken the power system's transition toward cheaper, cleaner electricity, and is moving beyond California. A renewed national expansion of community choice aggregation (CCA) is raising ambitions for transforming the U.S. power system.

On the heels of an explosion of customer choice in California over the last three years, the slowly growing aggregation market in Massachusetts is accelerating. In New York, a new version of aggregation is emerging. Customers in traditional markets like Illinois and Ohio are looking for new services from their aggregators. And national CCA organizations want to bring the choice to more states.

In states with legislation that enables aggregation, momentum is growing. Aggregation's popularity is softening utility resistance. Renewables developers' initial concerns about its creditworthiness are transmuting into commitments to make deals happen. One conflict aggregation still must face is the gap between the power system's reliance on bulk and diversified generation and the dream of a power system comprised entirely of local resources.

How and why aggregation works - Aggregation of investor-owned utility (IOU) customers is often called "public power lite" because responsibility for the delivery infrastructure and billing remain with the IOU but, like a publicly owned utility, the aggregation's generation mix is selected, controlled by and priced to the needs of customers instead of the utility business.

Nine states have legislation that authorizes local governments to aggregate IOU customers and leverage the buying power of their electricity purchases. In six of the nine states, IOU customers automatically become part of a local authority's aggregation unless they opt out and stay with the IOU. Ohio, Virginia and New Hampshire shift the opt-in/opt-out decision to the local government.

Aggregation has so far been done only in states with fully or partially deregulated power markets, where generation can be purchased from retail electricity providers (REPs) or independent power providers. "Legislation authorizes aggregation of customers' load in any competitive electric market," Marshall said. But it is "less difficult in retail states" because procurement of generation is already separated from ownership and maintenance of delivery infrastructure.

The first aggregations were in Massachusetts and Ohio in the late 1990s and early 2000s, Local Power President Paul Fenn told Utility Dive. "The primary paradigm was cheaper power." A "second wave" in the last decade shifted emphasis to renewables and "rate parity" that would simply "meet or beat" utility rates rather than steeply undercut them.

As the momentum behind aggregations and their leaders' sense of what they can accomplish has grown, contracting and marketing issues have become more complex. 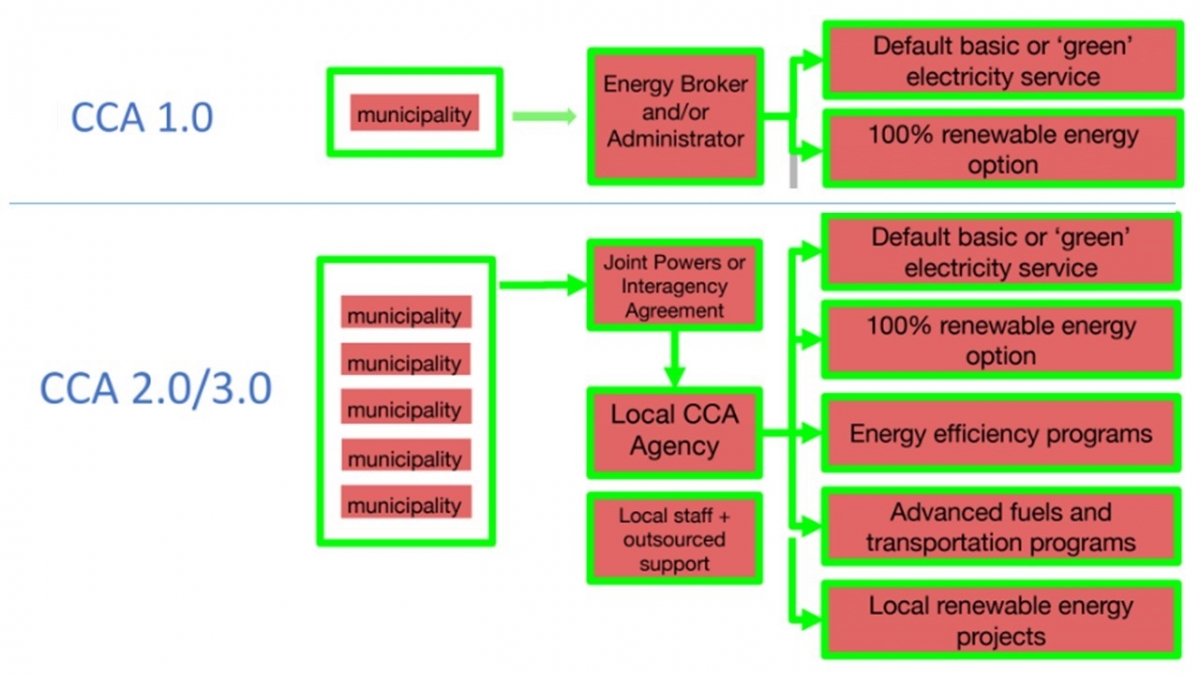 Capabilities and complexities are growing as the model evolves.

Beyond three years, version 3.0 would provide generation and programs that lead to more community economic development and local renewables. That could include microgrids sized to make communities self-reliant, built around community solar or community wind with storage and enhanced building and transportation electrification.

So far, version 3.0 is only partially realized, and only in California, Fenn said. The Northeast Ohio Public Energy Council is one of the longest-standing U.S. aggregations, serving 900,000 customers in over 230 communities, but remains in version 1.0. It has saved ratepayers $3 billion per year for the last eight years. But it "faces a policy mindset that is taking it backwards on energy policy." "Green" aggregations that exist in Massachusetts and are emerging in New York led to the current aggregation expansion in the Northeast. For East coast customers, Version 2.0's offering of greener power at no cost premium is often "more compelling than getting a 10% rate discount," Fenn said. "There is a lot of program innovation in Massachusetts, even compared to California."

Version 3.0 is "a profoundly different approach, an energy transformation," that represents the renaissance of CCAs, Fenn said. It is based on local solar, storage and energy efficiency, plus other distributed renewables, and focuses on load shaving and reform. But the approach only exists in California, having just emerged within the last year or two, said Fenn. Ultimately, version 3.0 will produce CCAs that are energy retailers and provide unbundled procurement, schedule transmission with their ISO, and have their own credit and collateral. Each could essentially be "like a mini-utility," Fenn said. 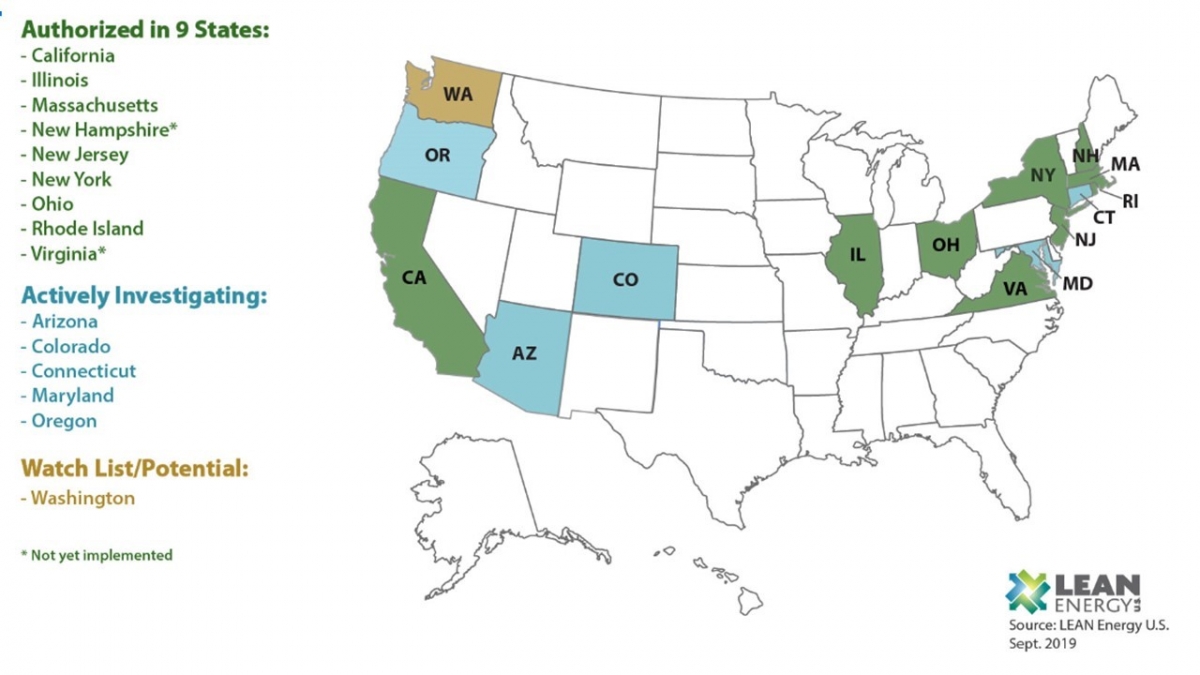 Three states represent the versions of aggregation being used, expanded or tested beyond California, Fenn and Marshall said. The number of CCAs in Massachusetts is growing slowly, but the move by aggregators to add more renewables in their power mixes is starting to accelerate that growth. CCA growth in Illinois has been falling off, but stakeholders are looking at new ways it can add value for customers. And New York CCAs are developing a new business model in which services as well as customers are aggregated.

Massachusetts now has over 140 municipal energy aggregations (MEAs), the state's version of CCAs, according to LEAN Energy. Growth has been steady for five years but seems poised to spike when major population center aggregations in Boston, Springfield and Worcester launch in 2019 or 2020.

Two factors have been key in Massachusetts and other Northeastern deregulated markets, stakeholders agreed. One is a new emphasis on moving to version 2.0, with environmental groups calling for MEAs to build "Green MEAs" based on new local renewables instead of REC purchases. The City of Newton's aggregation is led by former Massachusetts Department of Public Utilities Chair Ann Berwick, now Newton's co-director of sustainability.

"Newton is a Green MEA, but our price is competitive with the utility basic service," Berwick told Utility Dive. That shows today's low renewable energy costs can allow aggregations to move toward version 2.0. But rushing to version 3.0's high cost local resources "does not make sense" because version 2.0 MEAs "can drive the renewables market and potentially get a better rate than IOUs."

The other value aggregations offer is "consumer protection" because they are created by local governments, Berwick said. Massachusetts Attorney General Maura Healey's office has data on REPs' predatory marketing practices and concluded competition has not worked and should be eliminated — except for MEAs.

The growth of MEAs in Massachusetts is not due to problems with retail suppliers, "and, in fact, the MEAs are served by retail suppliers," Senior Corporate Affairs Director Chris Kallaher of multi-state REP Direct Energy told Utility Dive. More significant factors are state rules streamlining compensation to REPs and rules allowing REPs and MEAs to access lower prices in energy markets. "We are working with the Attorney General's office and state regulators to address these issues without compromising the potential for innovation that competition drives," he added.

Illinois is seeing a "resurgence" of aggregation growth after its 2011 to 2013 expansion slowed in 2014, according to LEAN Energy. In 2018, 571 of Illinois' 745 communities were being served by aggregations. Temporarily, above-market IOU electricity rates drove the two-year market spike, but growth has leveled as customers gradually returned to their IOUs when the price advantage disappeared, according to Illinois Citizens Utility Board Executive Director David Kolata.

Aggregation can still be a valuable option for customers, but it must offer more than short-term price savings, said Kolata. As in Massachusetts, REP "fraud and scams" support interest in aggregation, he said. Big businesses have the bargaining power and sophistication to avoid predatory marketing, "but residential customers need the leverage of municipal aggregations to make competition work for them." "It is quite possible there are companies doing things that are not particularly customer friendly," Direct Energy's Kallaher said. "But REPS are competing with established utilities to win residential customers and the solution is not to end it, but to fix it."

To add to customer's value proposition and drive growth, municipalities must also acquire an understanding of energy markets and learn how to manage system demand, Kolata said. "They need to incorporate demand response and energy efficiency and other future technologies and strategies to optimize the total load shape because that can transform the resource mix at lower-than-utility prices." That is what Fenn and Marshall would call version 3.0, and "some Illinois municipalities are thinking through how to do more to shape load," Kolata said.

"New York is a newer aggregation market but the number of cities enrolling is growing very fast and it is about to see tremendous expansion," Marshall said. REPs' "pervasive marketing fraud" and failure to serve residential and small business customers is again a driver, Fenn said. New York "is probably the next big huge growth area, because they are offering what people want, which is competitive prices, fraud protection, carbon reductions, renewables, local renewables and energy efficiency." New York's first aggregation Westchester Power launched in May 2016 and now serves 27 communities, Program Director Dan Welsh told Utility Dive. With a focus on keeping rates competitive, "we are basically version 1.0, but we also offer community solar, electric heat pumps and energy efficiency," he said.

Westchester Power is less interested in version 3.0 than in "cross-marketing an evolution of options," Welsh said. "The plain vanilla offering is based on RECs, which we now provide to 24 of our 27 municipalities. Community solar is also an option. And we are working toward meeting our load with local renewables. "The "evolutionary process" will also allow Westchester to incorporate learning from New York's smart meter rollout, he said. Smart meters could support time varying rates and the use of more local renewables "by shaping our load" so that demand coincides with "when renewables are more available and more affordable."

Inspired by these states' rapid growth, aggregation proponents are actively working toward enabling legislation in Connecticut, Pennsylvania, Colorado, Oregon, and regulation in Arizona, Marshall said. "Pennsylvania and Connecticut are most likely because they are deregulated markets and only need aggregation enabling statutes."

But the aggregation dream has begun confronting reality. The reality and the dream Aggregation 3.0 is beyond reach today because a system based entirely on grid-connected local distributed resources that protects resilience and reliability is "a very tricky balancing act," Sustainable Systems Research Foundation Co-Director Ronnie Lipschutz. "There is a learning curve and making it work is years away. Imagination is running much faster than reality."

The growth of CCAs also introduces regulatory complexities, Matthew Freedman senior attorney for consumer advocacy group The Utility Reform Network told Utility Dive. Aggregation is an opportunity only if it does not prevent "state oversight and control needed to ensure achieving resource planning and policy objectives."

These concerns are raised often by California policymakers and utility leaders. Aggregation leaders are working to address them, but the concerns continue to be raised, though many stakeholders don't want to go on the record criticizing aggregation because of its growing political momentum. Statewide energy policy initiatives, especially those directed at protecting system reliability, require coordination "unless policymakers choose to decentralize procurement and reliability entirely," he added.

Some states leave reliability issues to capacity markets, or compliance through REC purchases, but neither assures the development of new in-state renewables, he said. Other states, like New York and Illinois, procure through central agencies. States enabling aggregation must decide how they will protect policy goals and reliability standards. CCAs bring "fresh energy" to regulatory debates and their commitments to renewables offer "real added value," Freedman said. But a more effective strategy might be to focus on "what they can do at the local level with energy storage and energy efficiency initiatives and building and transportation electrification programs."

That, of course, is version 3.0, which Fenn and Marshall said remains more of an aspiration than an achievement, even in California. "CCA 3.0 is underway in California, Marshall said.  But the push for local power development in fully deregulated markets is compromised by the short-term contract practices in those markets."  It's also a balancing act with California CCAs' long-term procurements which tend to focus on utility-scale projects, she said.  This is all part of the evolving CA energy market where CCAs and other non-IOU providers must remain vigilant about stranded asset burdens and exit fees in the event of future restructuring or customer migration.